So I've accomplished a lot in the last couple of days. Knitting-wise, anyway.

Since I finished the legwarmers, I blocked the Pembroke (as always, yardstick for scale): 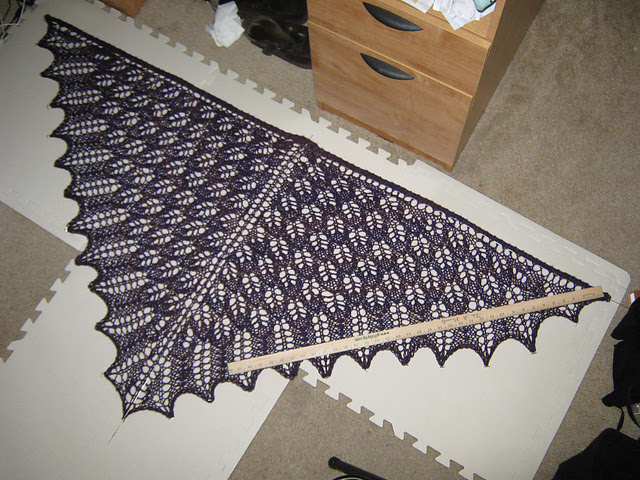 ...I finished my third of five dissertation projects (my mid-point for the end of the month check-in): 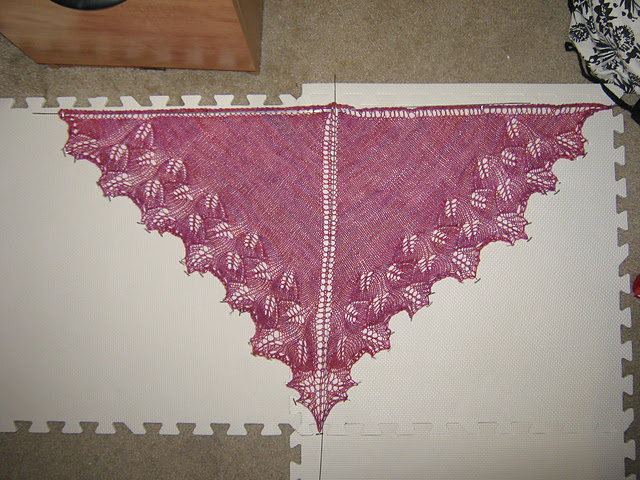 Note how this shawlette takes up considerably less space than the gigantamous one above it. Two blocks barely covered vs. three above. Still, very pretty :)

I also made two blanket squares for our team unity project. One of our team members is assembling the squares into a blanket to donate to a veterans' charity. Anyway, the pictures are really dark because the yarn is a maroonish brown and it's kinda hard to see the patterns. We'll give it a go anyway: 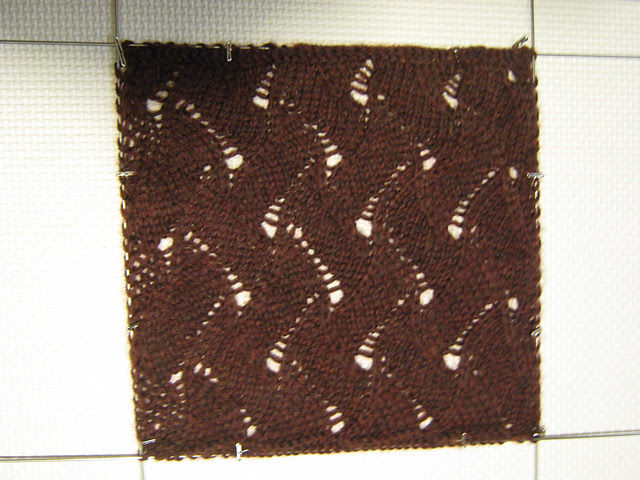 This one's supposed to look like flames, and the one below is a repeating leaf pattern. 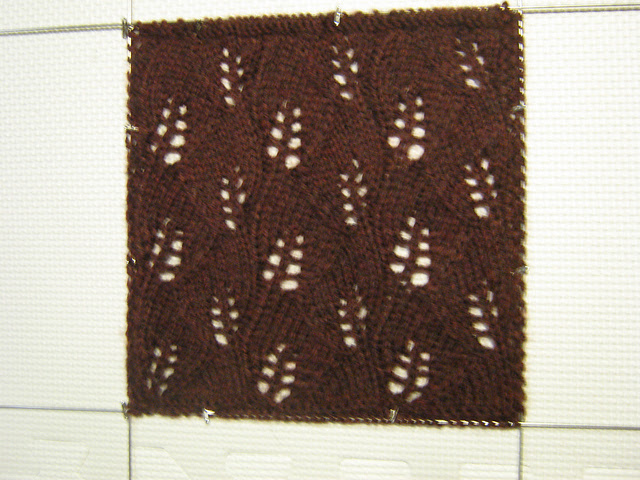 Finally, I cast on a basic pair of toe-up, two-at-a-time socks for my Nerd Culture crossover challenge. I bought some Knit Picks Felici in the colorway Time Traveler and I'm making these simple socks to show the colors inspired by the scarf Tom Baker wore as his tenure as the fourth Doctor. Even though these socks are bare-bones, I think the self striping and the colorway's inspiration will make them my favorite (and most wearable) socks to date. Granted, that's not saying much since I've only ever made two pairs previously.
Overall, Nerd Wars has been a great motivator for me. I love being on the Browncoats team. Not only is it nice to be doing as well as we are in the game (second place as of right now!) but the sheer enthusiasm of all my teammates for the game, for each other, for what the show means to so many people; it's really amazing. Also, for the crossover challenge this round, we're all exploring nerdoms that are unfamiliar, and it's quite extraordinary to hear from people who are just discovering the show and loving it.
I could pontificate for hours on why Firefly means so much to me, and what it means to so many people, but I think I've probably been sappy enough for now. Suffice it to say, this new-re-found passion for fiber arts of mine has only been fueled by this silly game I love so much and encouraged by all the people I've met while doing it. I haven't been passionate about anything, really, since I graduated college jaded about academia and my area of study. This creative outlet has been an incredible boon for me, in filling my days and giving me purpose, to create things that can be appreciated by like-minded (dare I say?) artists. And the "deadlines" of this game help set structure for my left brain, making sure I get it all done in a timely fashion.
Phew, that was long winded. For that, I offer you David Tennant:
No comments:
Email ThisBlogThis!Share to TwitterShare to FacebookShare to Pinterest
it's about Browncoats, Doctor Who, finished project, fo, nerd wars, project update, sappy, videos

So my team for Nerd Wars is in second place after the first round of play, trailing by only 16 points (which is pretty durn close). I'm super stoked.

Also, I finished my second of five projects for my dissertation (see previous post here for more info about my dissertation). I just have to finish one more by the end of the month (the pink shawl one) for my mid-way point. It's super exciting to be on a team that's doing so well!

Anyway, here's pics of my most recently finished projects (pop over to ravlery for pics from October...that stuff was sooo last month) 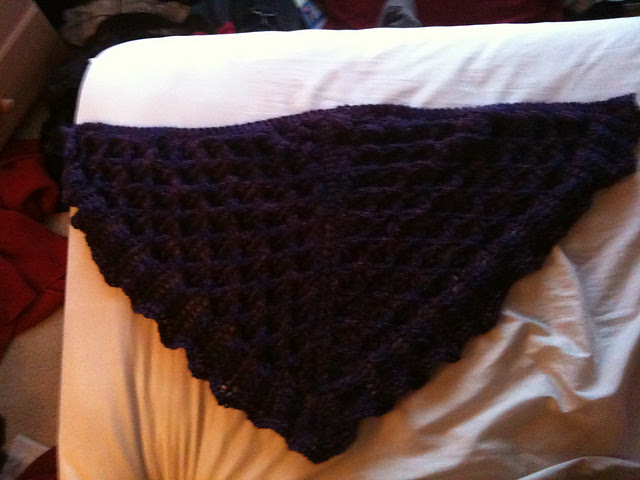 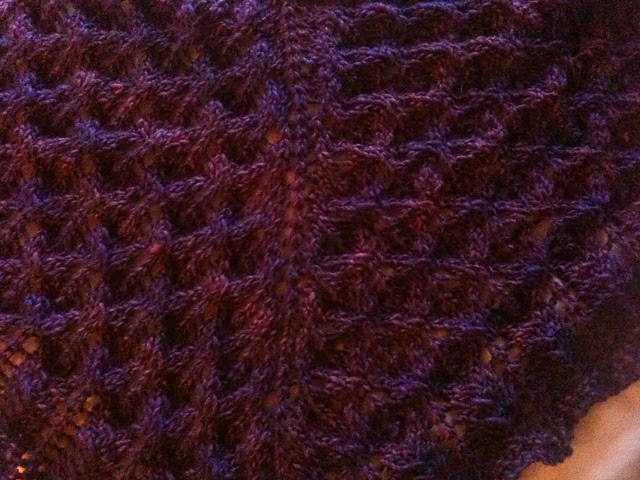 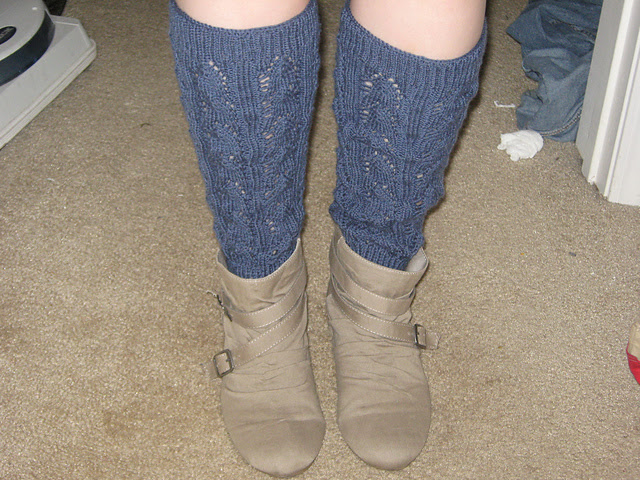 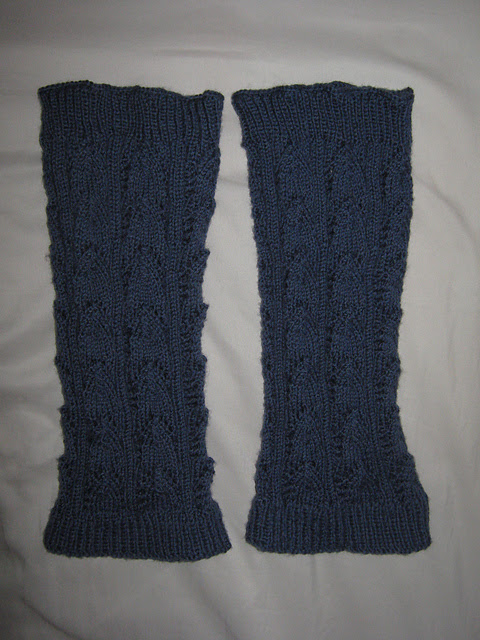